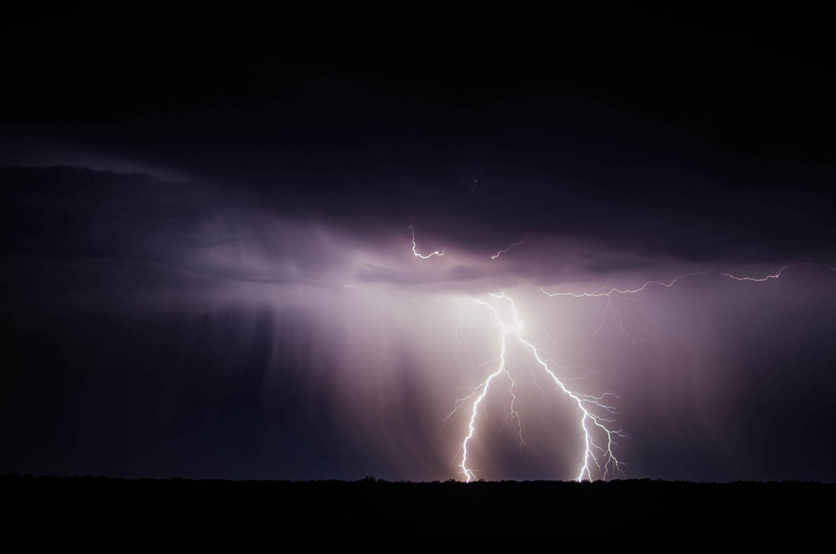 Lightning is one of the most dangerous weather conditions that you can encounter while on a wilderness trip. A powerful, electrostatic charge that illuminates the sky, invoking feelings of fear and awe in equal measure.

Your chances of getting struck let alone killed by lightning are remote but that can provide little relief when caught in a dramatic storm. In this article I’ll aim to highlight the dangers surrounding lightning and how you can improve your odds of avoiding being struck.

Predicting if a thunderstorm is on the way

Observing general weather patterns while on a wilderness trip is always a good idea. You can predict the weather with a reasonable degree of accuracy by keeping an eye out for certain clues.

Changes in wind direction and cloud formations can provide an early warning of impending storms. This doesn’t mean you’ll be able to avoid all danger if a storm does hit, but it should give you time to head to lower ground or reach the nearest shoreline.

When trying to predict if a thunderstorm is on the way, one of the best clues is in the formation of the clouds. Most lightning strikes occur below cumulonimbus clouds. Easily distinguished by their towering anvil-shaped presence in the sky, growing vertically from a low level to over 7,000 metres.

If you see a cloud displaying these characteristics it’s wise to start moving towards a sheltered area. 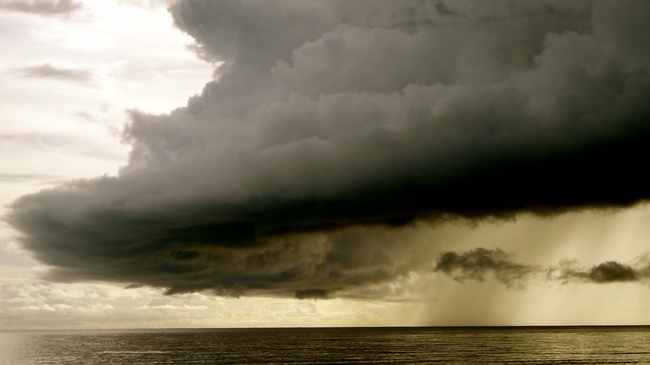 The tell-tale signs of a cumulonimbus cloud: anvil-shaped, rising vertically into the sky.

Thunder is another key indicator and is the sound made by the lightning discharging. As sound travels more slowly than light there is often a delay between the two.

Once thunder is audible you know that lightning must be between 1 to 10 miles away. Bear in mind that the turbulence of the air plays a part in your ability to hear it. If you’re already in a serious storm then you might see lightning strike before hearing any thunder at all.

The simplest method for estimating your proximity to a thunderstorm is by dividing the number of seconds between the flash of light and the thunder clap by five. For example, if you counted 10 seconds between the lightning and thunder then the storm is 2 miles away.

[bctt tweet=”Divide the no. of seconds between the flash and thunder clap by 5 to estimate its distance away.”]

Anywhere within 10 to 15 miles of a thunderstorm is the danger zone in terms of being struck by lightning. Bear in mind that while you are outdoors there is no way to be safe from lightning, you can only reduce the odds of getting struck.

Lightning is a sudden electrostatic charge that is known as a flash if it stays within a cloud or a strike if it hits the ground.

Negatively charged lightning called ‘leaders’ emanate from the base of the cloud in random directions with some heading towards the ground. Leaders that get within 100m of the ground meet with positively charged ‘streamers’ that rise from the closest grounded objects such as tall trees. 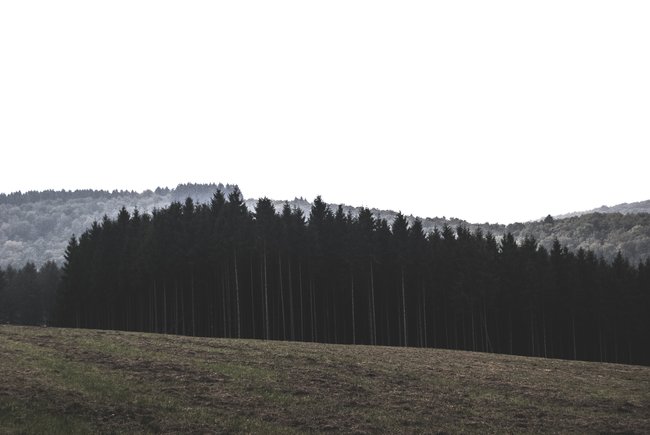 Tall trees attract lightning strikes so you should avoid small stands and individual trees, especially if they are the tallest feature on the landscape.

When the leaders meet with the streamers a lightning strike is formed. This is why it’s vital to stay away from tall objects when you get caught in a storm.

What are the odds of getting struck?

Though lightning accounts for around 24,000 deaths a year and 240,000 injuries the actual odds of getting struck in your lifetime is around 1 in 300,000. This is an average figure and people who spend more time outdoors increase their odds of being struck.

These are very low odds and it’s unlikely you’ll ever get struck by lightning, let alone killed, but it is important to be aware of the risks and the ways that you can minimise them should you find yourself outside in a thunderstorm.

Seeking refuge inside in a building or vehicle is the safest place to be. If you are near a cabin or bothy then these would be the top choice to wait out a storm and would dramatically reduce your chance of getting struck. Failing that, heading back to your vehicle if it’s close by is a good option. 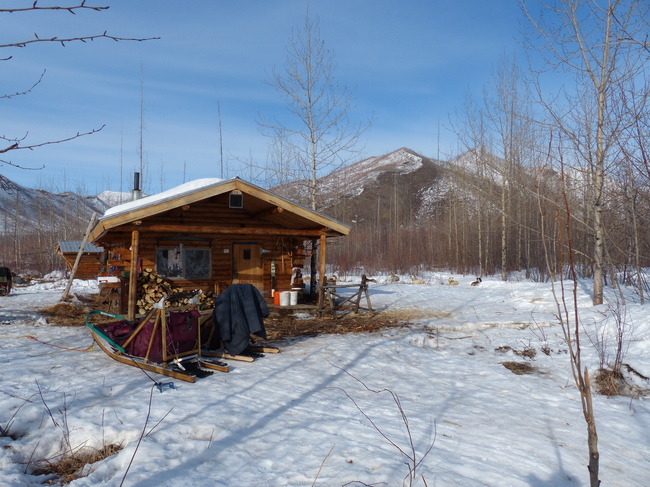 Nearby shelters such as a wilderness cabin or bothy are some of the safest places to wait out a thunderstorm.

Tents offer no protection from lightning and may actually increase your chances of getting struck since the metal poles will conduct electricity. Also the increased height of the tent compared the surrounding area may make it more of a target. If you are going to stay in your tent then make sure it’s not the tallest thing around.

In the same way that a tent may not be the safest place if you’re using metal tent poles, so too are any other nearby metallic objects. Fences and pylons are obvious examples but you should also avoid smaller objects such as ice axes, backpack frames and crampons. Metal is a good conductor of electricity so taking off any jewellery or watches as well is a good precaution to avoid electrical burns should you get struck.

Try to reduce your height. This means walking down off high ridges and mountaintops, if possible to whichever side has the least (or no) cloud cover. 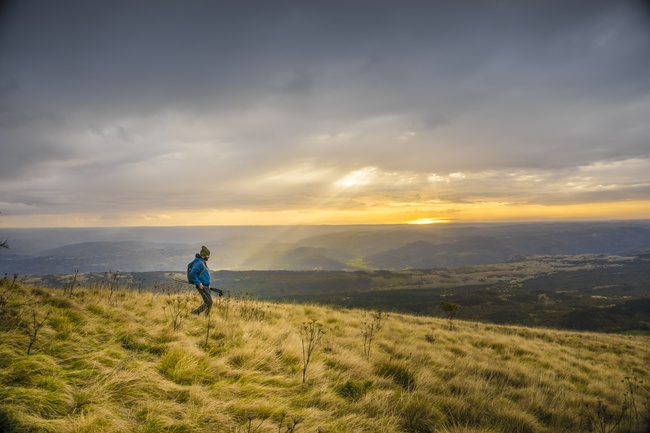 In you know that a thunderstorm is on it’s way try to make your way down from any high ridges.

Wide open areas are equally at risk though you may be able to reduce this by looking for any small ravines or depressions to shelter in. Anything you can do to lower yourself compared to the rest of your surroundings will decrease your chances of getting struck.

Lightning always targets the tallest features in the landscape so reducing your height compared to whatever is around you should be a priority. Stay away from any tall, lone features such as trees, cliffs or man-made objects as they will attract lightning strikes. Lightning can ‘jump’ wide distances so though you may not get hit directly, a side flash may bridge the gap between you and the original target.

Some sources suggest that there is a 45-degree ‘cone of protection’ surrounding high terrain features such as the top of a tree or cliff to the ground that will keep you relatively safe. This theory has now been debunked.

Modern advice suggests that the safest distance from a high terrain feature such as a cliff is 50 metres. With trees, you should aim to get as far away as possible as there is a higher risk of being struck indirectly.

If travelling through a forest, avoiding trees is likely to be impossible. The large number of trees will decrease the odds of any individual tree getting struck. As a rule of thumb, you should still try to keep away from the tallest examples.

Being in a forest is far safer than standing near a lone or small group of trees in more exposed terrain.

Avoid standing in water as it’s a good conductor of electricity. Don’t worry if the ground is damp or marshy as there is no evidence to prove that this is any more dangerous than dry ground.

If you are travelling on the water in a canoe for example then try to get to shore before the storm reaches you. As with being on land, open areas are the most dangerous. A river surrounded by higher terrain such as in a canyon will be safer than out in the middle of a lake. Also be aware of any trees lining the edge lakes or rivers as these may be the highest features around. 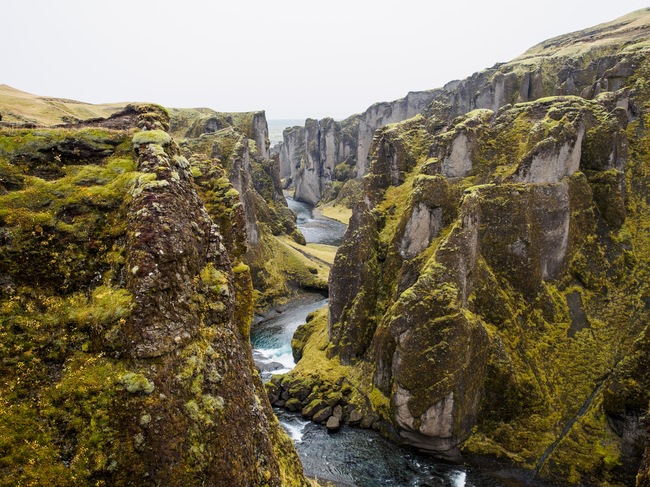 Rivers surrounded by steep canyon walls will be safer than in the middle of an exposed lake.

Direct strikes and side-flashes are not the only way that lightning can affect you. Ground currents are another threat. The distance that the current travels depends on the conductivity of the ground. The closer you are to the initial strike point though, the bigger the risk of transference.

Tree roots can conduct electricity if the tree is struck so avoid anywhere near the base of trees if possible. Try to insulate yourself from the ground by crouching on a sleeping mat or foam pad while keeping your feet close together.

Closing the gap between your feet will prevent currents passing through one foot and out the other. Also, don’t lie on the ground. The larger surface area of your body will increase the risk of a ground current passing through.

The lightning position doesn’t guarantee your safety in a thunderstorm but it can reduce the risks (though it’s hard to tell by how much). You should try to get as close to the ground as possible without lying prone.

Squat down into a ball with your feet touching and wrap your arms around your legs. If you are struck by lightning then this should allow the electrical current to pass through your limbs rather than your torso, avoiding the main organs. 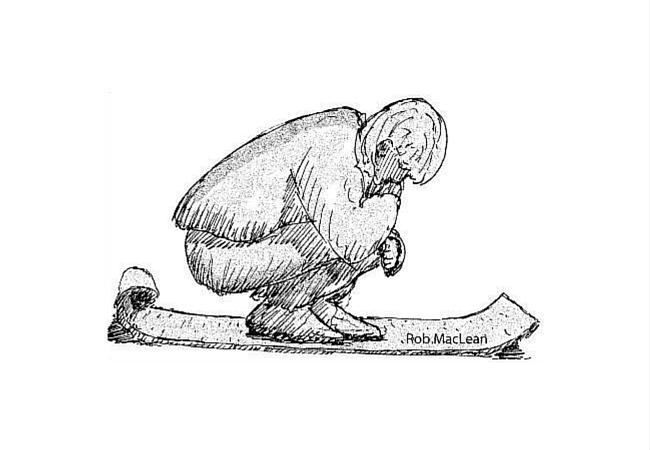 Adopting the lightning position will increase your odds of avoiding or surviving a lightning strike. Source: Rob Maclean

When travelling as part of a group in exposed terrain, each person should adopt the lightning position at least 50 feet from each other to reduce the chance of multiple casualties in the event of a strike.

Effects of a lightning strike

The effects of being struck by lightning vary depending upon the severity or the strike and whether you are hit directly or not.

When lightning passes through the body it often leaves a scar described as a ‘lightning tree’ named after the 18th Century physicist, Georg Christoph Lichtenberg who studied the same pattern in static electricity. The tree-like scar is a result of the capillaries beneath the skin rupturing due to the electrical shock. 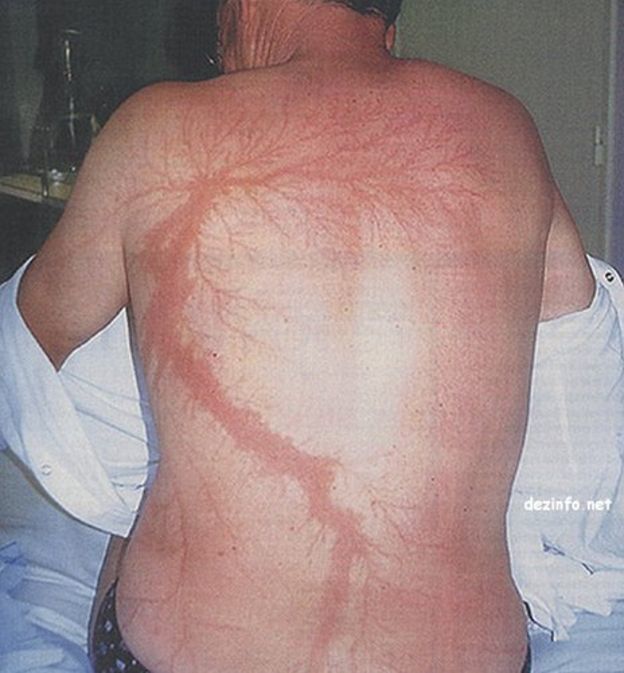 A typical lighting scar: This tree-shaped scar is a result of the capillaries beneath the skin rupturing. Source: BBC

The more immediate danger is the potential to stop the heart and severely damage the internal organs. You may need to perform CPR to resuscitate a victim of a lightning strike.

Fortunately, there is no danger of any electrical charge remaining after the victim has been struck so CPR should be performed immediately if required.

Burn injuries are common as a result of the high current passing through the body. Secondary burns can be caused by metallic objects worn next to the skin which is why it’s important to remove any jewellery. Trauma to the body can also occur in the form of fractures as well as explosive injuries to the feet.

All of these injuries would require immediate medical attention. If you are in a remote area then it’s always wise to ensure that you have some way of calling for outside assistance should you need to.

The possibility of thunderstorms should not prevent you from venturing into wild places. In reality, the risk of getting struck by lightning is very remote and there are far more likely dangers such as hypothermia that you should be aware of.

If you do find yourself in a situation where you are outside during a thunderstorm then bear in mind the strategies above to further limit the likelihood of getting struck.