Preparing for the Pennine Way: A Wild Camp on Dartmoor 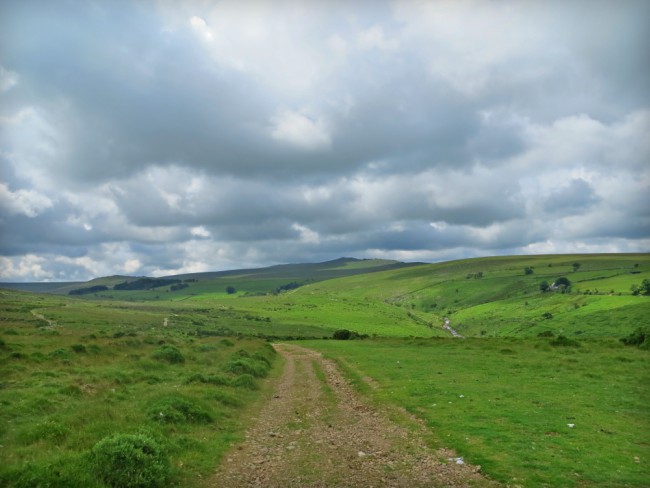 It’s funny how little time I spent on Dartmoor growing up living only half an hour or so away from it’s wild borders. We’d take the occasional trip up there, usually the popular walk up Haytor from the neighbouring car park, but I had little sense of what lay beyond.

Walking didn’t really appeal, even when the opportunity to train and take part in the Ten Tors Challenge at school came along. Many of my friends took part (though never completed the challenge due to the outbreak of foot and mouth disease) but I never felt the sense that I was missing out on anything.

Only more recently have I spent any considerable time exploring the rugged landscape fuelled by a desire to catch up on lost time. Preparing to walk the Pennine Way this summer has provided the perfect excuse to spend more time criss-crossing the wild playground in my backyard.

Preparing for the Pennine Way

In terms of preparation for the Pennine Way I’ve spent time reading and listening to others who have completed long-distance walks. The most common advice for training is to just hike as often as possible. And so that’s what we’ve been doing for the last six months. Any spare time has been spent walking mainly up on Dartmoor to prepare our bodies for the challenge ahead.

As well as preparing our bodies we’ve also been preparing our equipment and clothing. Our longer trips have always been taken by canoe so weight has not necessarily been the most critical factor in our gear choices.

Having initially weighed our gear it was apparent that we’d need to spend some time lightening the load both by cutting back on what we bring along and also finding lighter weight alternatives for some items as well.

After considerable time pouring over various online gear lists, YouTube videos and outdoor equipment websites we’ve got our base weights down to a sensible 9kg each. Over time I can see that this would be easy to improve on but time and unfortunately financial constraints (aren’t there always) have meant that this is the best we’re likely to do.

So, with only a month to go before we start out on our journey along the Pennine Way we felt a practice overnight camp on Dartmoor was in order. After a couple of hours pouring over the map we decided on a route around the north of the moor, taking in some of our favourite spots.

We arrived at Belstone in the late morning with a 12 mile day ahead of us. Backpacks filled with all the necessary items and food that we’d need for the next 2 days we headed out of the small village and on to the grassy moor.

The route took us immediately south-west towards the imposing figures of Yes Tor and High Willhayes looming in the distance. The path was rocky with loose stones that slid under foot. While there were patches of sunlight illuminating parts of the landscape, the sky was predominantly dull and filled with shades of grey and black.

As we rounded Scarey Tor the path sloped downhill past a small bridge spanning the East Okement River before rising again towards Rowtor. The bright patches of sun soon gave way as the wind also picked up. It wasn’t long before we both stopped to put on our windproof jackets. Rain seemed inevitable and unfortunately we were soon proved right. 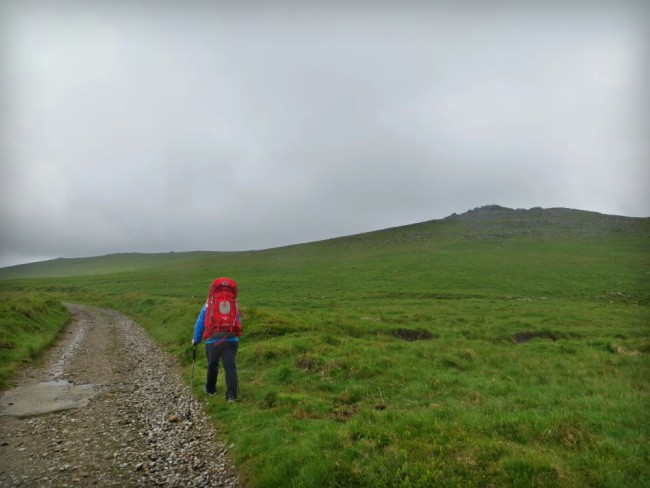 Military activity is obvious, not least because it’s within the Okehampton military training area. We past what was clearly a firing range with wooden platforms looking out over the moor and evidence of freshly dug ditches which likely had been an uncomfortable hiding place for troops in the days previous.

As we ascended High Willhayes the wind speed picked up considerably. We ducked down behind the rocks that line its peak to have a quick snack and try to work out the least soggy route back down to join the path heading east. Other than the lack of snow that we’d enjoyed here back in the winter, you’d be forgiven for not realising that this was summer now.

We watched the clouds drift quickly across the sky, optimistically viewing the sun break through only to be beaten back behind its grey fortress. This for me only added to the sense of wildness as we picked up our packs and headed down off the ridge. 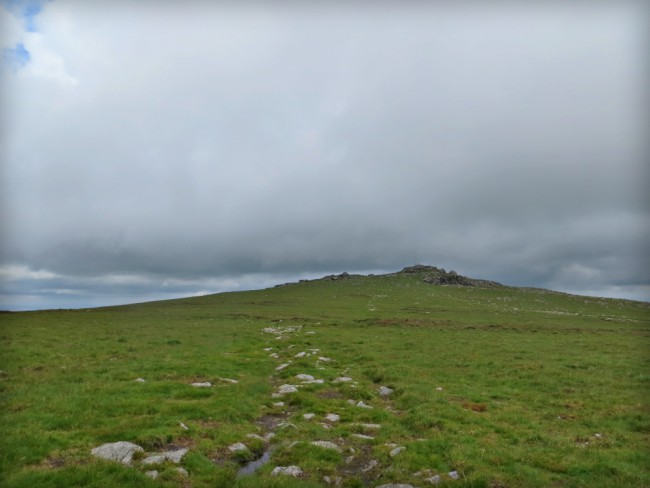 Having descended into Steeperton Gorge we crossed a small ford, stepping on rocks to keep our feet dry as the water picked up pace before dropping over the edge of a small ledge. We’d meet the water again downstream before nightfall though it would take a shorter, more direct route through the valley. Our course by contrast was taking us immediately up the steep incline to the peak of Steeperton Tor. 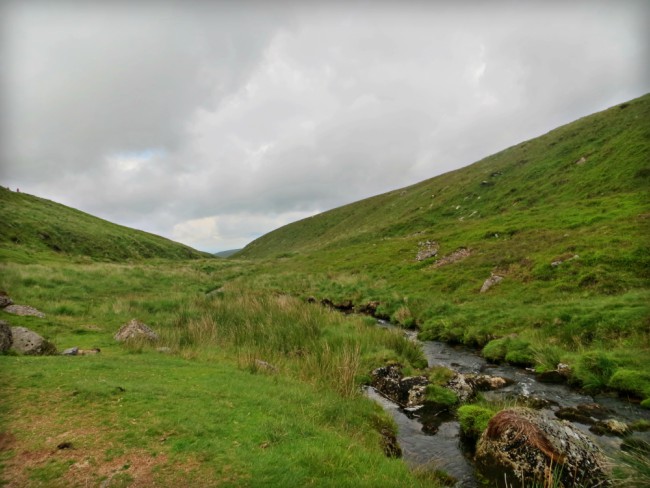 The views from the top were worth the slow climb up there as we looked back along our route so far. Undulating moorland, pockets of bright sunlight and the unmistakeable craggy outcrops that lie at the summit of many of Dartmoor’s Tors surrounded us like a wild fabric. Nature’s beauty only interrupted by the distant haze of civilization and the small, military hut stood firmly on Steeperton Tor. 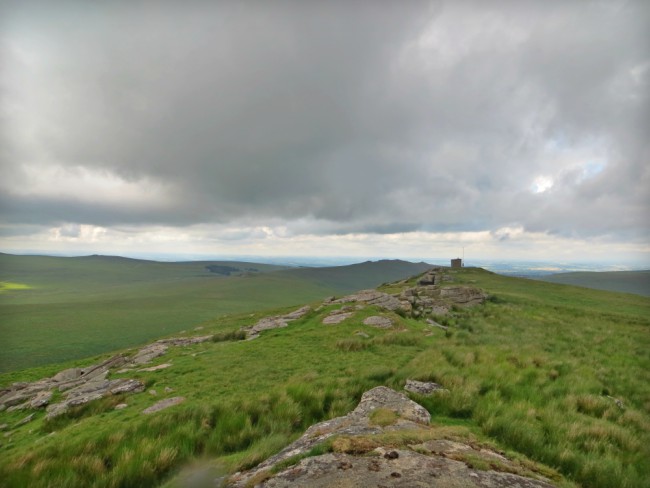 The clearly defined paths that had led us most of the way to this point soon faded away to smaller tracks that were harder to follow. After navigating our way across Steeperton Brook which was particularly wet and boggy in places, the ground firmed beneath our feet as we walked towards Hound Tor and Little Hound Tor beyond.

The dull clouds peeled back slightly as we descended what was supposed to be a bridlepath towards our camp spot for the night. Even with the GPS on my phone there was little to no evidence that such a path ever existed. Instead we picked our own route downhill past small groups of sheep who stared at us intently before scattering out of our way. 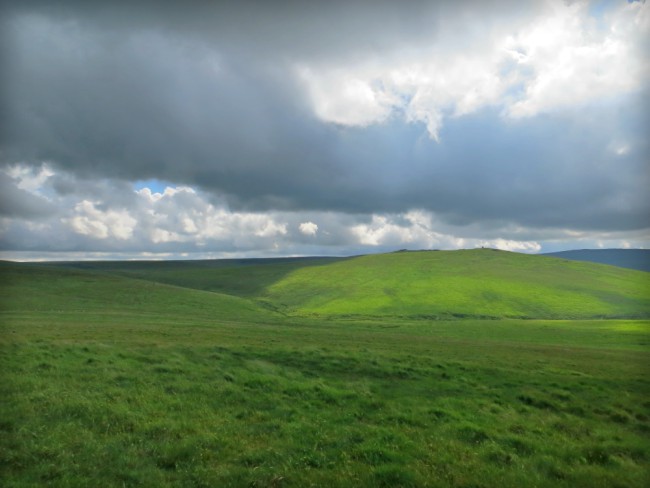 The ground levelled out as we neared Taw Marsh which was to be our home for the night. Others had the same idea as three small tents appeared in front of us. Various perfectly flat areas of grass made for an excellent camp site with the meandering river providing a water source for our evening meal. 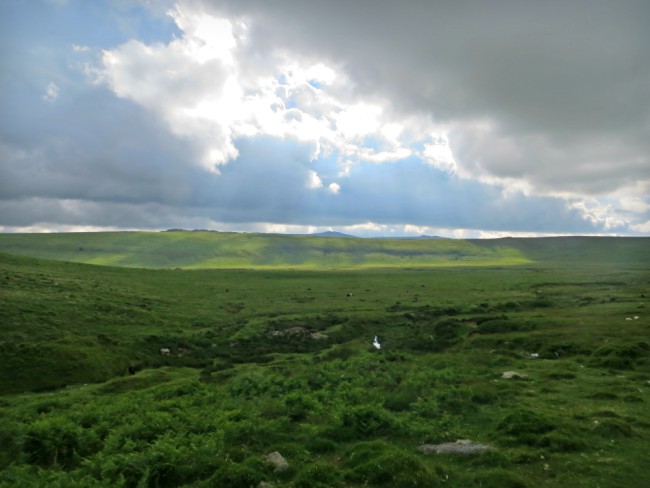 We set up our tent and I went to filter some water while Marie started to organise our sleeping gear inside the tent. The Sawyer Mini filter I had brought along for the task worked faultlessly. Unfortunately filling the collapsible bottle that came with it from the slow moving river proved a much more challenging affair.

After 15 minutes of battling to collect and filter less than 2 litres of water I figured that would do and walked back to our shelter to start dinner. It wasn’t long after finishing our Supernoodles and a hot drinks that we both fell asleep. 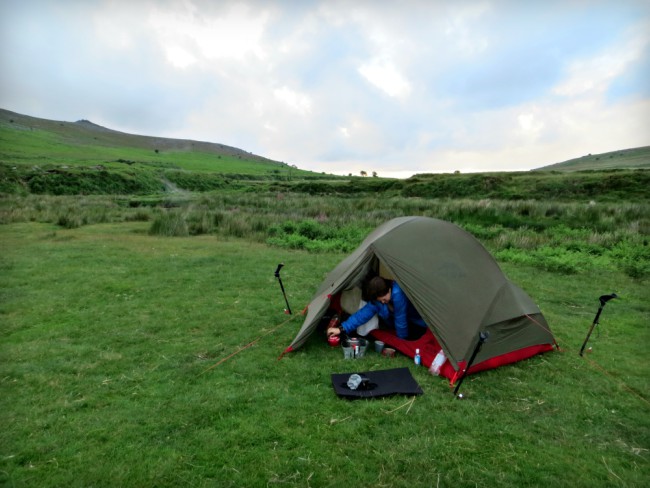 Breakfast in the morning was quick and we were soon packed up and ready to head off towards Cosden Hill. Dark clouds swirled around the top of Belstone Tor that now lay behind us. It was a chilly start to the day though the narrowing contour lines soon meant that we we taking layers off.

We looked down on Belstone as we passed a disused leat lining the north slope of Cosden Hill. As we turned south to ascend we were greeted by the gaze of a group of curious sheep. They clearly weren’t expecting visitors and it felt as if we had disturbed an important and private meeting. They certainly weren’t about to let us hear their grand plans and waited a good while after we’d passed before turning back to each other to continue their discussion. 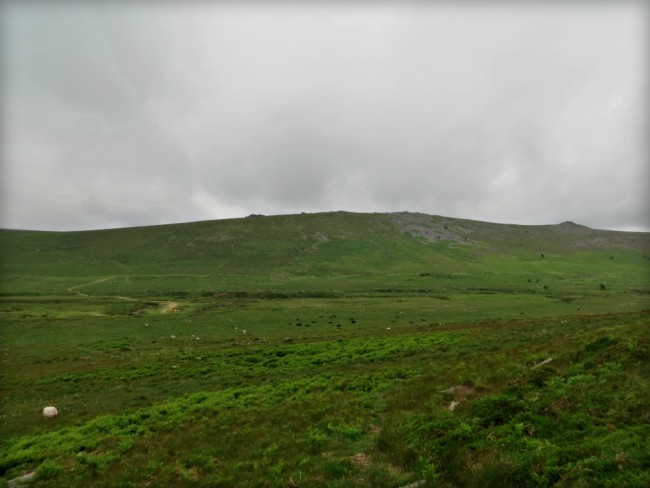 On reaching the trig point on Cosden Hill the way ahead was clear. A series of smaller tors lay in front like a spine twisting southwards. Some were familiar from the day before while others presented a new challenge. 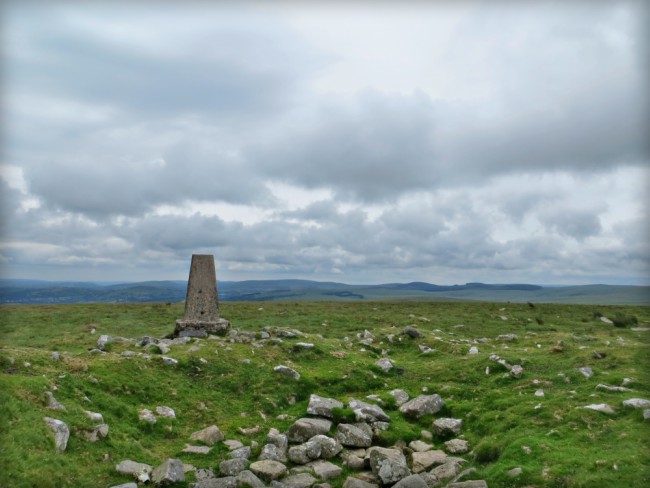 Just south of Little Hound Tor we passed Whitmoor stone circle. While not the largest stone circle on Dartmoor it’s nevertheless noteworthy as being the highest above sea level and notoriously difficult to get to. Surrounded by marshes and with no roads nearby mean that you have had to make some effort to witness it. 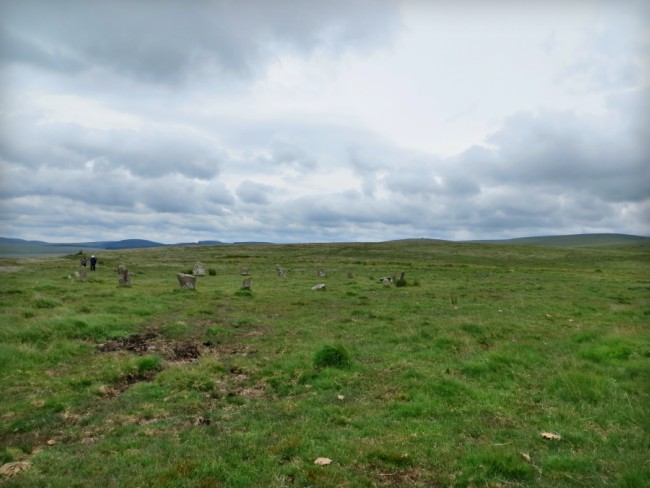 Even more interesting is the debate that surrounds the White Moor Stone that stands nearby. It’s origin is still unknown though it’s suggested that it may have once been part of the stone circle and was stolen to become a boundary marker of various parish borders. 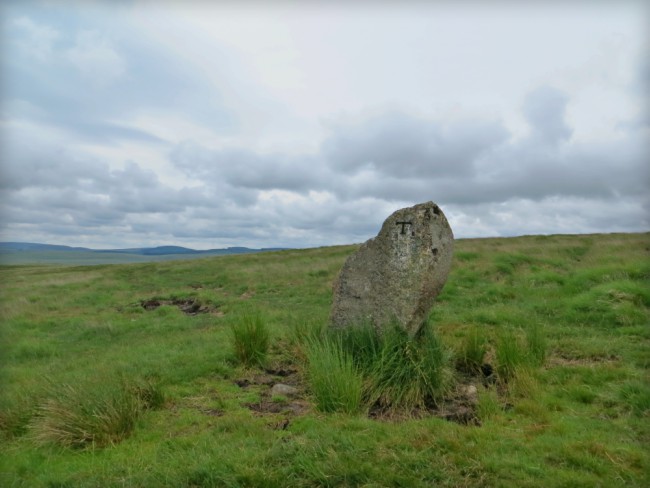 We carried on past the towering rocks on the aptly named Wild Tor as the ominously named Hangingstone Hill drew into view. The day of rain that had been forecast luckily hadn’t appeared. The sky still remained stoically overcast while it was the ground that became sodden as we reached the foot of the hill. 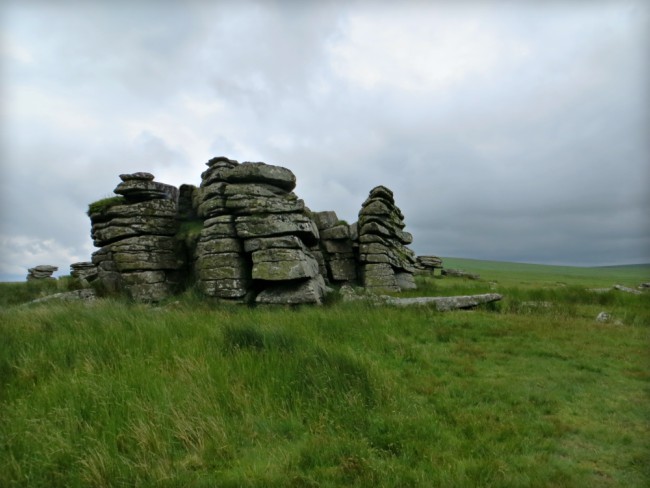 A sea of cotton-grass marked what must have been a particularly wet area on our right. The white tufts swayed gently in the breeze, hiding the damp ground beneath. The upward path deteriorated quickly and we soon lost sight of it as we rounded the west edge of the hill. 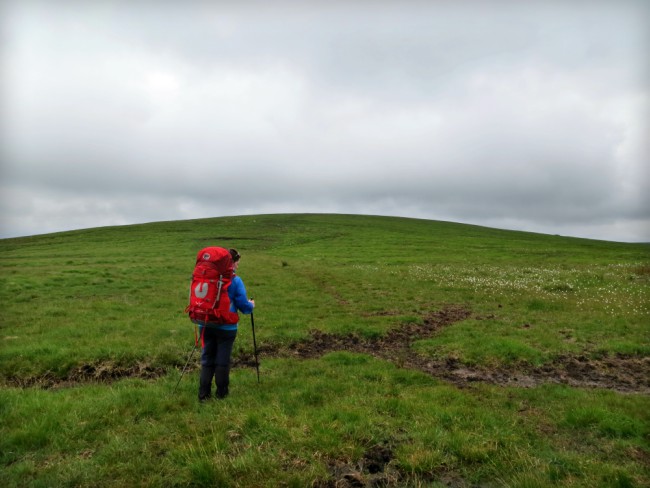 Thick clumps of grass and heather made it slow going to the top. If there was a path we’d strayed far from it. A group of youngsters huddled behind the small hut at the crest of the hill to shelter from the unhindered wind. Their leaders instructing them that they were only halfway looked to be met with disappointment in their eyes as they pulled their lunch from their packs. 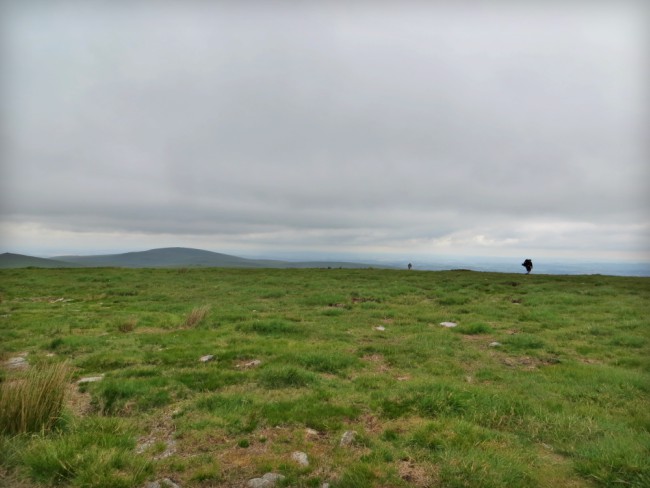 We stopped for a snack before continuing on, this time northwards. The path leading downwards was far more obvious and substantial. It was easy going from here back towards Oke Tor and Belstone Tor beyond. We’d done this stretch many times before though usually in the other direction. It seemed less familiar this way and presented a welcome change to previous outings.

The rain that we had been promised unfortunately caught up with us as we walked along the exposed ridgeline between Oke and Higher Tor. Looking around, this high route provided a perfect panorama to survey our entire walk albeit now shrouded in cloud. 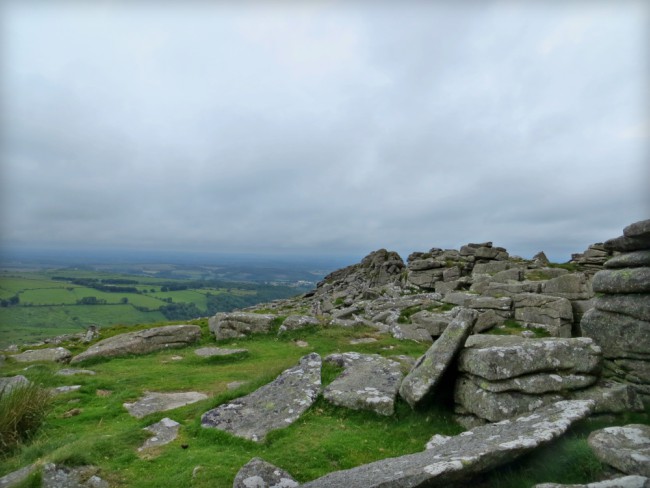 We scrambled between the rocks towards the top of Belstone Tor before slowly working our way down the other side. Soon the gate that marked the edge of the moor and the end of our walk appeared in front of us. It has been a wonderful wild walk through a beautiful part of Dartmoor. We were now looking forward even more to our Pennine Way hike along the backbone of Britain but promised ourselves that we would be back on Dartmoor soon to explore more of this wild landscape.

One Comment on “Preparing for the Pennine Way: A Wild Camp on Dartmoor”