Walking High on the Roof of Dartmoor 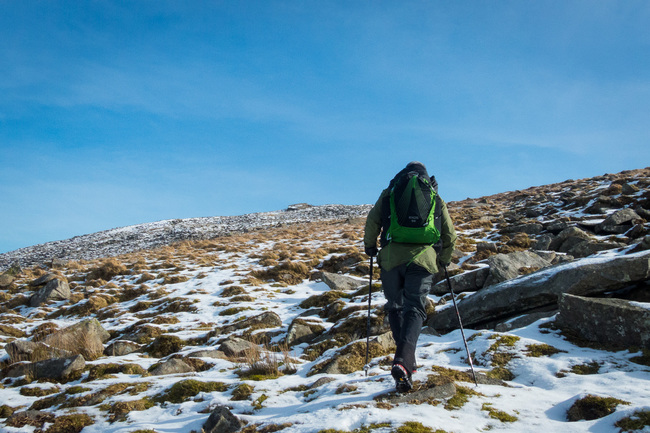 The lure of the north moors had grown too much having passed by the snow covered hills on my way to work the day before.

We grabbed our packs and donned various warm layers before heading back up the A30 towards the promise of a winter adventure.

Rising high above the Devon landscape, a wild and unspoiled sense of remoteness towered ahead of us.

Only the curling waves of a windswept reservoir lay in front of the snow dusted peak as we began our wintry walk. 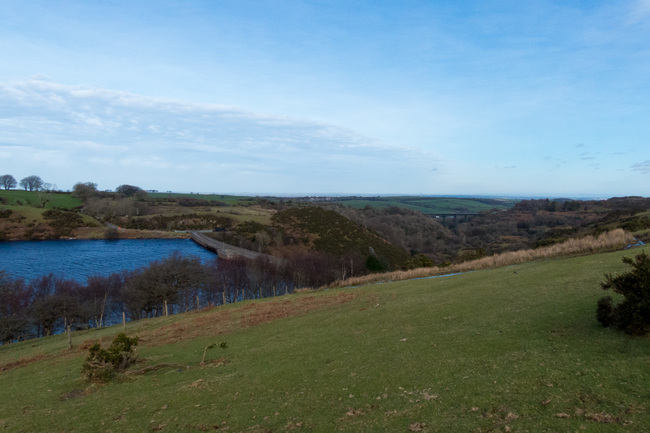 Looking back towards Meldon Reservoir.

We left the car park behind and started towards Meldon Reservoir. The sun greeted us like an old friend as we made our way across the dam that spans the West Okement valley.

With the reservoir behind us, we started our ascent towards Yes Tor. Once believed to be the highest point on Dartmoor before more modern surveying techniques gave the title to its craggy neighbour, High Willhays.

You would be forgiven for the mistake given that only 2 metres separate their highest points and it could be argued that Yes Tor is the more imposing outcrop of the two.

Both remain the only two peaks in England below the Peak District that rise above 610 metres (2000 feet). 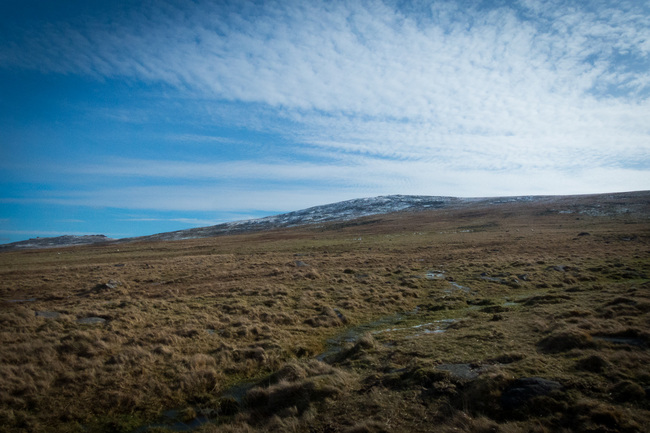 The well marked track gave way as we walked towards the foot of Yes Tor. Underfoot, what looked like a usually marshy area had been hardened by the recent drop in temperature.

We stepped gingerly across the patches of ice. I was thankful of my trekking poles on a couple of occasions as I prevented some embarrassing slips.

The bitter chill in the air which had greeted us from the car was now a distant memory as we plodded slowly up the hill.

Every once in a while we stopped to take in the impressive view as well as regain our breath on our way to the top of the 619m peak. It certainly looked easier on the map. 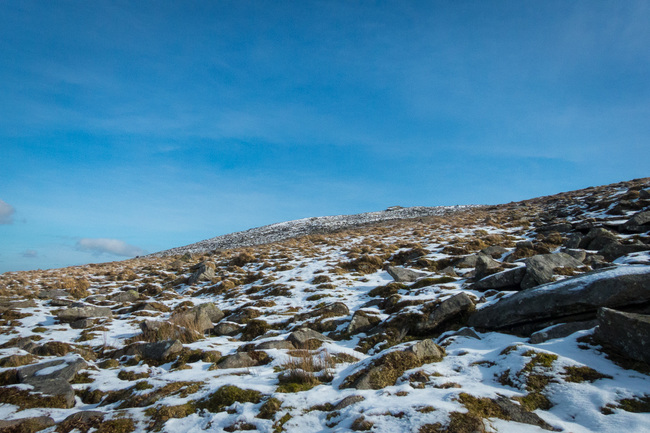 Looking at the summit of Yes Tor, 619m high.

We continued up to higher elevations as the the greens and browns underfoot became distinctly white.

I found a childish pleasure from watching my boots sink deeper into the snow. A gentle reminder of our trip to Alaska last winter, though without the team of huskies in tow.

I picked my footings carefully between the hard, granite rocks, clamped against the hillside. Feeling my way with my trekking poles and following old footsteps that had broken through the softer, white layer.

Standing at the trig point at the top of Yes Tor with High Willhays in the background.

As we reached the summit, a swirling wind caught us by surprise. We had obviously been sheltered from it by the solid hillside. But now it lashed untethered against our cheeks as we clambered to the top of the immovable, metamorphic peak.

Wind howling, we took in the incredible view across the Devon countryside. Though the evidence of civilization is clear to the north, a glance southwards offers an exciting sense of wilderness. 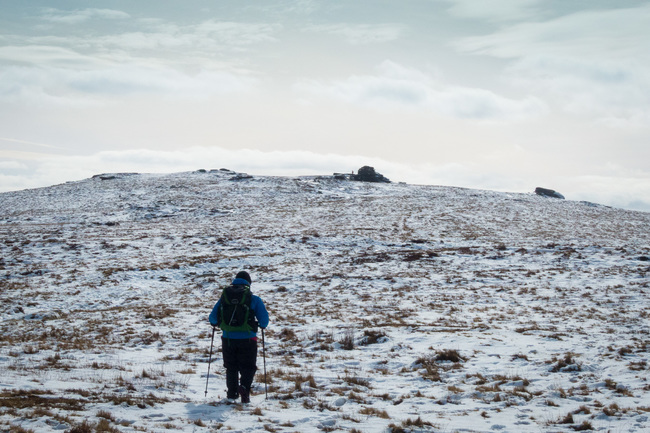 Crossing the snow towards High Willhays, the highest point on Dartmoor.

Walking through the snowy saddle, filled with an inspiring sense of space, we approached High Willhays. A rocky outcrop provided welcome respite from the wind as we removed our packs and stopped for lunch.

The sun was fighting the growing army of clouds above our heads while we sipped on our hot chocolate. It had been a glorious day so far but the weather on Dartmoor is predictably unpredictable.

I feared the sun was losing the battle and though rain still seemed unlikely it looked to be a cold descent towards Black Tor, our next destination. 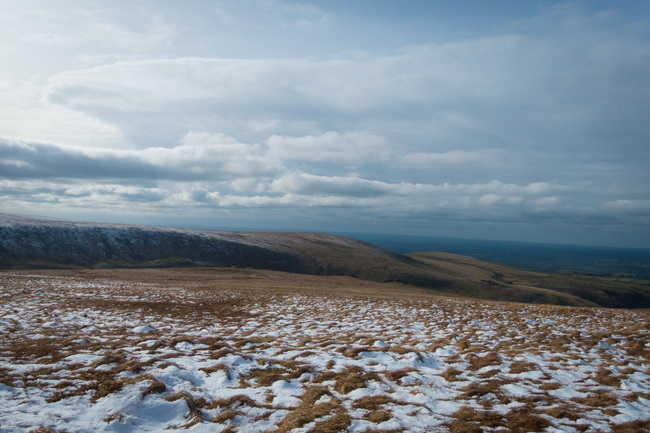 Looking down the valley from High Willhays towards Black Tor.

It felt slower walking down than it had going up as the cold, grey clouds gathered above. The wind ripped the warmth from my hands as it forced its way through the narrow valley.

The snow covered ground slowly retreated with every step downhill. The ice was turning back to water, requiring us to sidestep marshy potholes and jump over streams as they cut their own winding track down the hill.

The three rocky piles that mark Black Tor lay ahead, standing stoically along the ridge of the valley.

Once we had descended the 130 metres to the largest of the three stony sentinels, I checked my map, harboured from the wind in its protective grasp. 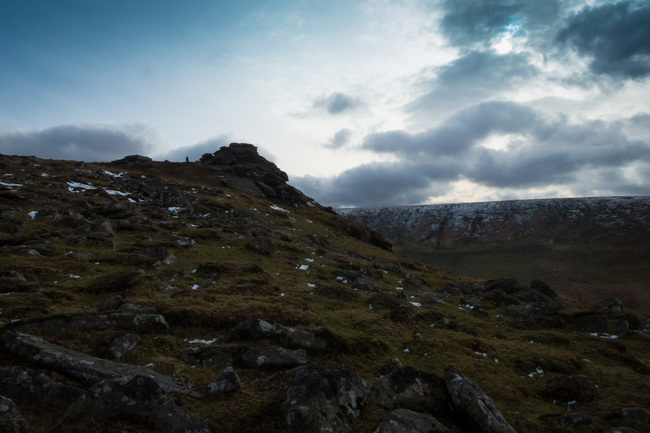 One of the three rocky outcrops at Black Tor with the clouds rolling in.

We started walking north to avoid the steepest descent before dropping down towards the West Okement River.

As we neared the river, I glanced back to see the valley walls rising impressively around us.

The ground unfortunately became squidgy and difficult to walk through. Not surprising considering the rainfall we’d experienced over the last few months.

From my time with the map I knew that we would have the luxury of a footpath soon enough. 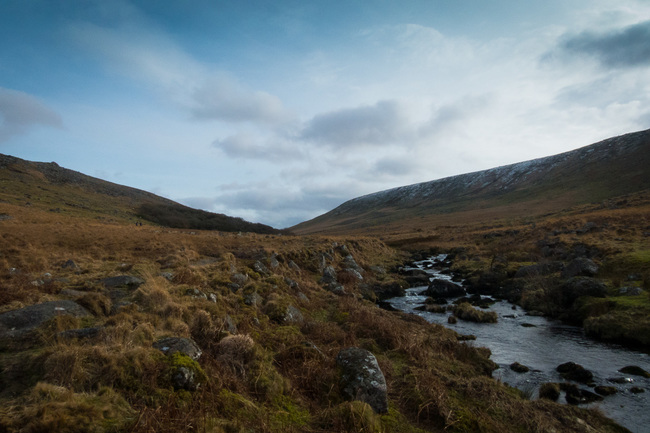 The sodden moorland got worse before it got better. I used my poles to check the ground before putting any weight down. I had enjoyed watching my feet disappear into the snow earlier but didn’t hold the same excitement for the muddy soup that surrounded us on our way along the river edge.

Finally, after a lot of tiptoeing through the waterlogged terrain we joined the more solid pathway. 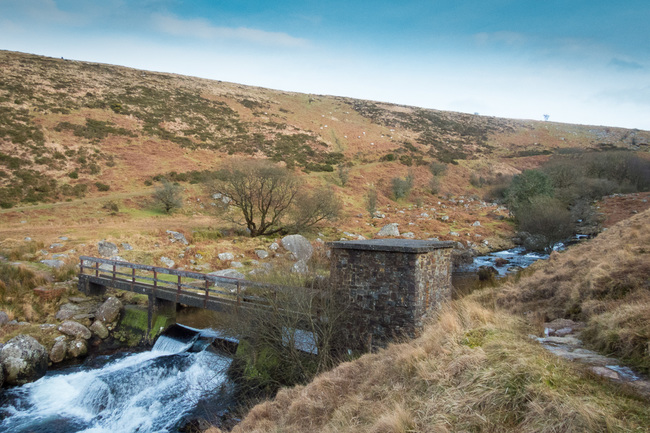 A small footbridge with West Okement River below.

Just as the torrid river was snaking its way down towards the reservoir, so were we. My hands were warming up again now that we were out of the wind that had followed us since summiting Yes Tor.

The path carried us over a small bridge where we stopped briefly to watch the icy water cascade over the rock strewn river bed below.

The bright start to our day had all but vanished at this point as darker, more ominous clouds reinforced their place in the sky.

We followed along the path, through a small ford until it deteriorated into mud as we rounded the northern side of Meldon Reservoir.

The mud gave way to tarmac just outside the car park. marking the finish point of our splendid winter outing. 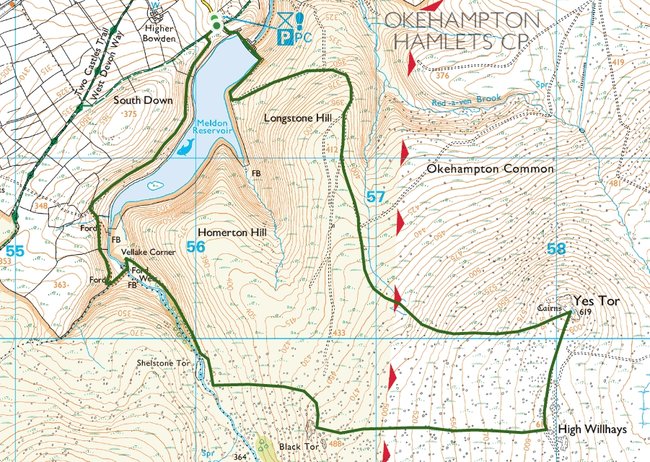 4 Comments on “Walking High on the Roof of Dartmoor”