The waves were breaking over the front of our canoe. Marie was noticeably quiet. We paddled hard for what seemed like hours towards our destination along the shore of the largest lake in Finland. The wind attacked us from one side, waves bouncing off the towering granite rock on the other.

Though I kept it to myself, I was thinking how we might get ashore should we capsize. The fear was especially great knowing that everything we needed for our trip was in the canoe with us. Tent, sleeping bags, clothes and various equipment. Let’s just get there as quickly as possible I thought.

Lake Saimaa is a huge archipelago. A labyrinth of over 3,500 islands and a drainage basin the size of Belgium. We’d not experienced anything like it and out first paddle made us briefly doubt our decision to take the trip.

Alaskan huskies are not a pure breed, they all look quite different from each other. What sets them apart is their stamina and tolerance for the bitter Alaskan winters. They sleep outside year round whatever the temperature without a problem. A quality I wish I’d shared the previous night.

For a second night we couldn’t hold out to wait for an aurora and we turned in at around 9.30pm. It was still light until 11pm and each day would only get longer. Much different to the barely few hours of daylight they had received just a few months previously. Marie was feeling a little better but had become a bit nervous of getting back on the sleds again. She had fallen off the most and it had knocked her confidence a bit. I knew she would feel better after a good night sleep and so we donned an extra set of layers and turned in for the night.

The next morning I woke early having slept much more soundly. My first thoughts turned to getting the stove going, which I did as quickly as possible once I’d managed to locate the lighter. We went through our usual morning routine and prepared to take down the shelter. Thankfully my spare clothes had dried by this point and I was keen to keep them that way. 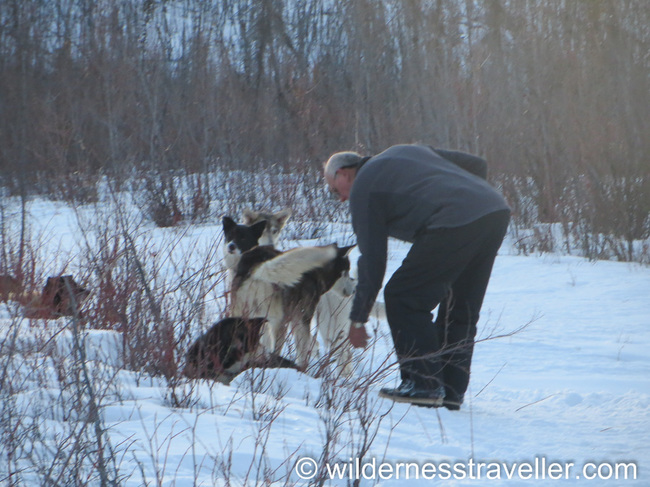 We had just passed the cabin that we were originally supposed to spend the night. Our camp site would be a short distance ahead. As I got ready to go my dad flew past me shouting ‘whoa, whoa, whoa’ as he was being dragged along, legs hanging off the back of the sled, with just his arms outstretched, hanging on to the handle.

There were two clear grooves in the snow where his legs had been. Unfortunately I wasn’t able to get to my camera in time to capture it but it had quickly become one of the highlights of my day. Apparently Nugget had decided that he didn’t want to wait any longer and had immediately started chasing Marie’s sled.

After untangling his dogs and climbing back on to his sled, we caught up with the others and made our way to where we would spend our first two nights. We picked a flat spot, not far from the river and had hoped to use it as a source of water. When we later tried, there was no easy path to it and so we settled for melting snow instead.

We were all buzzing after out training run and talk turned to the trip ahead. I can’t remember who mentioned it first but we learnt of a very steep drop we would be tackling on our first day. They called it ‘suicide hill’. It was built up a bit to scare us and though we joked about it at the time I think we were all slightly apprehensive of what lay ahead the next day.

Before we turned in for the night I asked Matt about where we would be sleeping while out on the trail. He’d arranged for us to visit two cabins, the second of which would be his. Wanting a more authentic wilderness experience I asked if we could try ‘hot tenting’. I’d read about others enjoying this type of winter shelter and was keen to give it a go for myself.

Rather than sleeping in a normal nylon tent and wrapping up warm, you take a canvas tent and use a wood burning stove instead. Not having had an opportunity to try this in the UK it seemed like the perfect time to give it a go. I’d worry about breaking the news to my dad later. 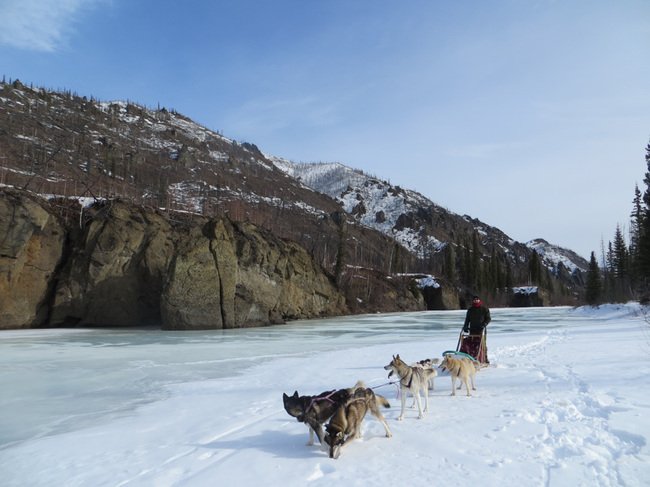 We were finally touching down in Eagle, a small community on the US Canadian border. With a population of around 85 people, it’s not only one of the small places I’ve been but also one of the most remote. Cut off from the nearest city for months of the year it was clear we were getting closer to our Alaskan wilderness.

For as long as I can remember my dad has wanted to go dog sledding. After his 70th birthday my partner Marie and I decided it was time to make the dream a reality. We scoured the net for companies offering dog sledding tours. Sweden, Finland, and Norway were discussed though the conversation always ended the same way, “but it’s not Alaska is it?”

We wanted remote, rugged wilderness, the real deal. A weekend in Scandinavia, however beautiful, just wasn’t going to cut it. Then I came across Bush Alaska Expeditions, a family business offering a proper wilderness adventure in the Yukon Charley Rivers National Preserve. A 2.2 million acre area of protected, pristine wilderness. After a few emails back and forth to Scarlett we were booked.